In the coming weeks, Centreon will announce its newest version of the software suite. Version 18.10 will bring its fair share of new functionalities, with specific changes kept under wraps until its release. We’ll also announce a new versioning scheme, including bi-annual software release plans. Centreon is strengthening its organization in line with its new international ambitions and scheduled software releases align with our new plans!

Centreon is growing at a fast pace to keep up with technology trends. While enterprises accelerate their digital transformation, they’re looking for valuable business-aware IT monitoring solutions. The Centreon software suite perfectly responds to these new challenges and is becoming a global market leader across all industry sectors.

Centreon is expanding its international reach by opening operations in Luxemburg and North-America. Led by Romain le Merlus, cofounder of the company, Centreon opened its North American headquarters in Toronto in September, 2018. 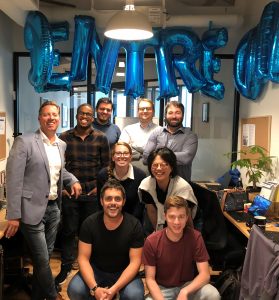 As a consequence, Centreon is being strengthened with our Product and R&D team doubled in size within 18 months. Because of our growth, Centreon is making steps to provide a more transparent, easy to understand software release plan designed to help our open-source users and customers better organize their IT Operations.

With the release of Centreon 18.10, our update to the versioning scheme apply to both the main software suite (Centreon open-source, Centreon IMP and Centreon EMS) and to all of its software components.

In a few weeks, we will simultaneously release the following:

Now is the time for all Centreon aficionados who’ve been using our products with care since 2005 to take five minutes to go through the five stages of grief to finally accept they will no longer have to juggle with multiple version numbers of Centreon Web 2.8, Broker 3.0, Engine 1.8, MAP 4.4, BAM 3.6 or MBI 3.2 that come together to make Centreon EMS 3.4.6. We agree, at first version 18.10 sounded strange to us too, but the truth is, we got used to it and have never looked back!

[End of the break] 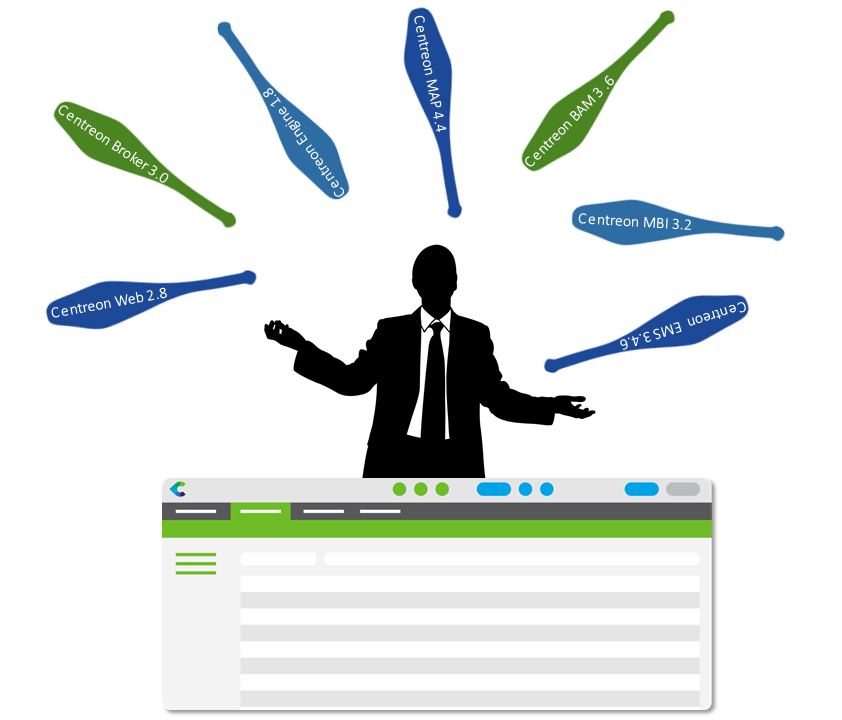 One new version every six months

By broadcasting our release dates well in advance, we hope to facilitate how IT Operations Management teams plan and organize their plans. In particular, organizations need to ensure their entire production environment, combining Centreon with many IT Automation and ITSM tools, stays up to date. IT is so critical that IT Monitoring itself is increasingly critical, requiring careful planning to make sure all involved tools are always fully operational.

We promise to ensure updating versions as smooth and transparent as possible. This new bi-annual release plan is a first step towards the longer term goal of continuous software delivery.

With this new bi-annual release plan, Centreon will fix software bugs on three versions simultaneously: the current version as well as the previous two.

As usual, only critical fixes will make it to the oldest version. This is summarized in the following diagram:

If you think the information in this article is incomplete, or you already have detailed questions about the new product lifecycle or the current software versions (such as Centreon 3.4.6 or Centreon Web 2.8.x): don’t worry, we’ll get back to you in due time. At the time Centreon 18.10 is released, the online product documentation will have been updated with more detailed information. We also plan to share answers to the most Frequently Asked Questions.

Since 2005, we’ve been proud to serve our more than 200,000 loyal open-source community users. Our Centreon IMP and Centreon EMS solutions are enjoying growing, global success. Releasing Centreon 18.10 is a further step in the development of the Centreon software company.

By bringing more transparency and clarity to new software versions, we’re gearing up for the acceleration of digital transformation and new IT Monitoring challenges Centreon users are facing today and for many years to come!

Every month, Centreon extends its connector catalog (a.k.a. monitoring packs or Plugin Packs) and implements new ones, allowing you to connect your IT monitoring with more ITOps tools. The result: increased visibility and business observability ...

Every month, Centreon extends its connector catalog (a.k.a. monitoring packs or Plugin Packs) and implements new ones, allowing you to connect your IT monitoring with more ITOps tools. The result: increased visibility and business observability ...

Software Releases
30/11/2022 IT Monitoring: graphical views made easier than ever with Centreon 22.10 and its revisited MAP extension

Summary: alongside new software version 22.10 of the Centreon monitoring platform, its popular MAP extension has been totally redesigned to facilitate the creation and update of graphical views. Views can be seamlessly migrated from the ...

Three years ago exactly, when releasing Centreon 18.10, we switched to a two-software-release-per-year lifecycle plan. We haven’t looked back since. Seven software releases later, we’re still committed to this schedule. Come spring and fall, you ...

Artificial Intelligence technologies and critical improvements in Alert Management and Auto-Discovery make monitoring Cloud-to-Edge infrastructure more efficient than ever. Years after years, whatever the pandemic situation and its implied remote working realities, we stick to ...

It’s April, and there you are, a new version of Centreon is hatching. This blog post provides a quick overview of what to expect out of 20.04. The best way to discover what the new ...

We’re constantly evolving our IT monitoring platform and approach to make it as easy as 1, 2, 3 to leverage IT infrastructure monitoring as a frontline performance enabling tool. As we’re launching our most recent ...

We are proud to announce today the general availability of version 19.10 of our Business-Aware, Hybrid IT Infrastructure Monitoring solution: Centreon EMS. Every six months in April and October Centreon releases a new version of ...

There’s a new Centreon EMS version and you may be wondering what new possibilities it can open for your organization. In this post, we’re giving you three compelling reasons and more to explore Centreon EMS, ...

Ready to see how Centreon can transform your business?

Keep informed on our latest news

Thank you for your subscription.